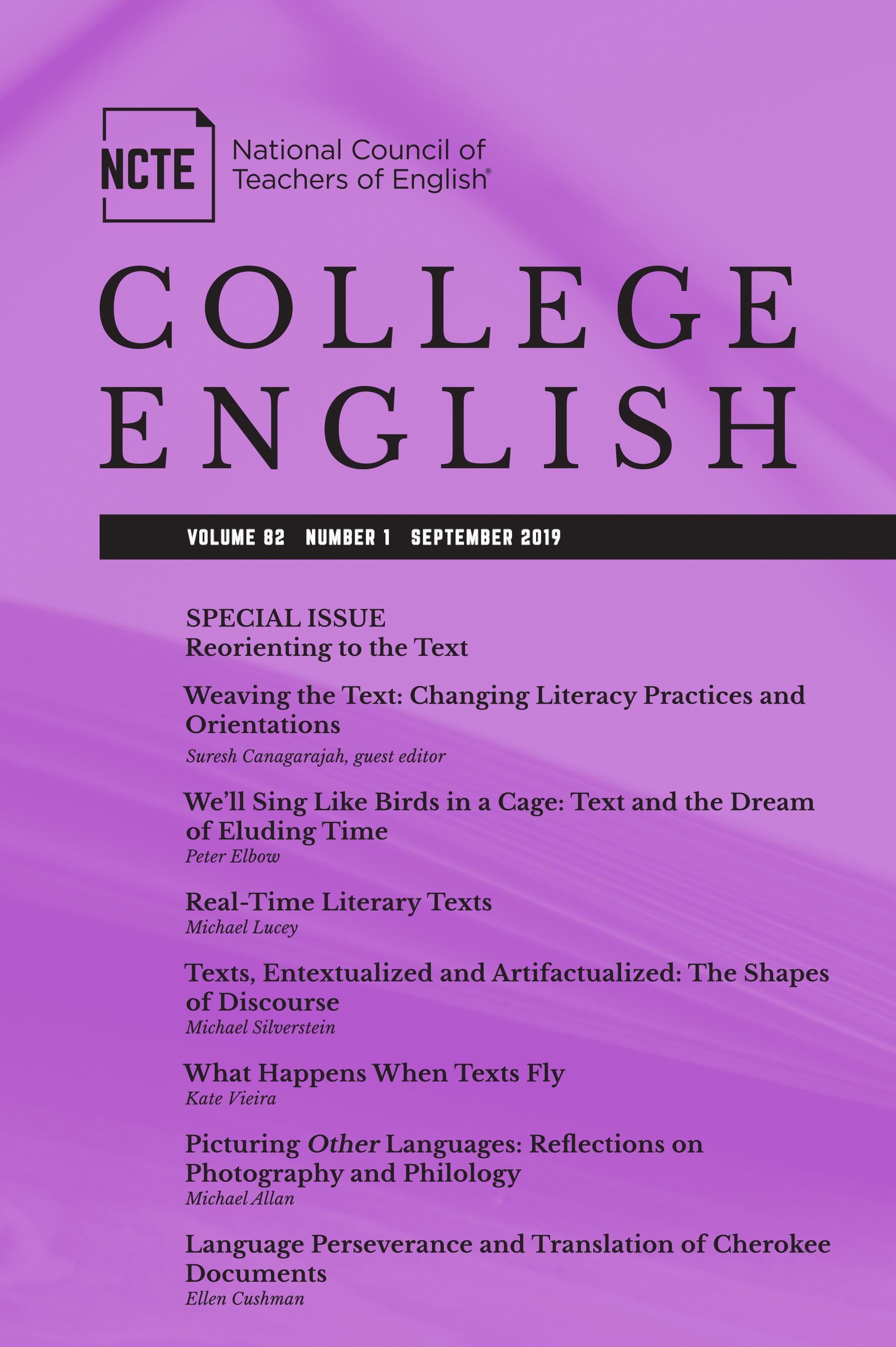 SPECIAL ISSUE: Reorienting to the Text

Weaving the Text: Changing Literacy Practices and Orientations
Suresh Canagarajah, guest editor
The guest editor’s introduction situates the theoretical and analytical turns in orientations to the text in historical context. In it, he outlines how diverse considerations in the weaving of the text have come to be integrated under the notion of activity. While these developments have opened up the text to collaborative and decentered weaving in the fullest material, social, and semiotic contexts, they are also vulnerable to subtle forms of control in meaning-making. Canagarajah calls for strategic and critical engagement in text construction and reception for more inclusive, ethical, and equitable outcomes. He also introduces the rest of the issue.

We’ll Sing Like Birds in a Cage: Text and the Dream of Eluding Time
Peter Elbow
Text embodies a central paradox about words and time. A text consists of words spread out in space that can be seen all at once; in a sense, text tries thus to elude time. King Lear also tries to elude the existential order of time and mortality by dividing his kingdom, giving away a third to each daughter before he dies. Yet text is most powerful in its impact on readers when it is heard, that is when time is foregrounded so that we feel the pull of narrative and hear the music of intonation. Thus Lear experiences the revenge of time through the betrayal of his two eldest daughters and the suicide of the only daughter who was loyal to him.

Real-Time Literary Texts
Michael Lucey
This article explores how a certain number of concepts and practices from the field of linguistic anthropology can clarify for literary and cultural critics the interactive nature of the production of meaning around cultural artifacts. The author includes case studies of the critical practices of Ross Chambers and Pierre Bourdieu in order to explore how cultural artifacts, in particular textual ones, are recreated, recontextualized, or reactivated differently in different sets of hands, in different places and times, and how these differences can be taken to be a function of the indexical capacity of a work, a capacity that is revealed differently in its interaction with any given reader.

Texts, Entextualized and Artifactualized: The Shapes of Discourse
Michael Silverstein
We distinguish the two kinds of organization in discursive phenomena—here termed denotational text and interactional text—that emerge or come into being in the real-time space of language-mediated communicative events. Such events as experienced must be distinguished, as well, from the artifactual precipitates of language-in-use in graphic or even pixellated mode. Such artifacts, produced through inscription by a “writer” or equivalent and frequently circulated through mechanical or electronic reproduction, require a reconstituting engagement on the part of a “reader” so as to contribute to a completed communicative event. Insisting on such multiple distinctions afford us a clearer grasp on problems of interpretation of “texts,” whether literary or other kinds (including the current artifact-mediated one) with which the work of culture goes on in people’s social life.

What Happens When Texts Fly
Kate Vieira
This article addresses textual circulation—the ability of texts to travel, via institutions and people, across space and time. Using a literacy studies perspective, and drawing from three ethnographic studies of literacy conducted with communities in the United States, Latin America, and Europe, the author examines the relationship between textual mobility and power. Specifically, she highlights the role of textual circulation in reinforcing power, negotiating power, and building power, ultimately arguing for attention to textual circulation as crucial to understanding not only literate meaning-making, but also literate change-making.

Picturing Other Languages: Reflections on Photography and Philology
Michael Allan
What is it to see a photograph of language? This essay draws together various semiological scenes (Barthes’s reflections on indexicality, Niépce’s early photograph at Le Gras, the Rosetta Stone, and William Henry Fox Talbot’s photograph of Egyptian hieroglyphics) to question the underlying relationship between philology and photography. At first glance, philology and photography might appear to offer two distinct semiological regimes—one to be approached as a matter of languages, codes, and symbols, and the other as an ontological trace imprinted with light. To counter this seeming opposition, the essay focuses on Talbot’s brochure of Egyptian hieroglyphics as it reveals language anew: on its pages, the photographic trace of linguistic symbols. From this encounter between philology and photography—between Barthes, Niépce, Champollion, and Talbot—arises an entangled history connecting Orientalism, translation, and media theory.

Language Perseverance and Translation of Cherokee Documents
Ellen Cushman
Recent efforts to decolonize archives have advanced the creation of protocols for working with communities to identify culturally sensitive materials and to select metadata categories for these materials. A next step in decolonizing the archive begins with designing user interfaces and computational infrastructures for translating indigenous language manuscripts with community members’ needs, audiences, and purposes taken into account throughout the process. This article describes the Digital Archive of American Indian Language Preservation and Perseverance (DAILP), which will support indigenous communities, scholars, archivists, and librarians with their collaborative translation processes of indigenous language manuscripts. The author suggesst that creating a community-based digital archive with decolonial translation processes helps to ensure the ongoing creation of indigenous peoples' knowledges, interpretations, and representations of the past.

Announcements and Calls for Papers