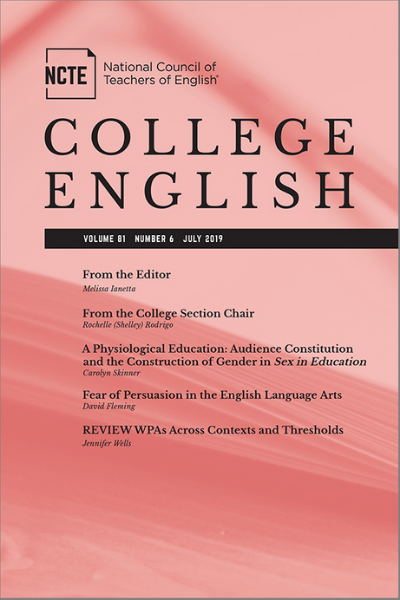 From the Editor
Melissa Ianetta

A Physiological Education: Audience Constitution and the Construction of Gender in Sex in Education
Carolyn Skinner
This article examines the complementary processes of rhetorical gender construction and audience constitution in the case of Edward H. Clarke’s infamous Sex in Education (1873), finding that Clarke’s reliance on reproductive physiology to identify limits on women’s education aligned with his invitations to readers to see themselves as inclined to make decisions based on scientific facts and theories. As an analysis of some of the texts written in response to Sex in Education reveals, however, both Clarke’s construction of gender and his constitution of his audience were challenged by his contemporaries, suggesting that even a text as influential as Sex in Education is only a small part of the story of rhetorical gendering: our understanding of how a text constructs gender is incomplete without assessing whether or how that construction and the audience constitution that supports it were taken up, promoted, challenged, or subverted by its audience.

Fear of Persuasion in the English Language Arts
David Fleming
Persuasion, the act of influencing or trying to influence others by appealing to their beliefs, values, and emotions, was long the focus of rhetorical art; and skill in persuasion, the goal of rhetorical education. But under modernity, persuasion gradually lost its place in both rhetorical theory and schooling. Although argument enjoyed a late-twentieth century revival in US postsecondary language arts, with persuasion sometimes coming along for the ride, the movement did not last. Since the mid-1990s, “persuasion” has largely disappeared from the vocabulary of composition-rhetoric. The loss has been most felt, however, at the secondary level, where the Common Core State Standards explicitly disparage “persuasion” and extol “logical argument.” The new regime claims to promote objectivity but may only be encouraging division. As educators, pre-K–16, we need to revitalize the arts of (ethical) persuasion.

REVIEW: WPAs across Contexts and Thresholds
Jennifer Wells
The author explores WPAs in Transition: Navigating Educational Leadership Positions; Contingency, Exploitation, and Solidarity: Labor and Action in English Composition; and Writing Program Administration at Small Liberal Arts Colleges by ruminating upon potential threshold concepts for writing program administrators that emerge from these texts. Wells suggests these texts can help readers understand facets and frames of WPA work that otherwise might only be understood after a long career as a WPA.

Announcements and Calls for Papers