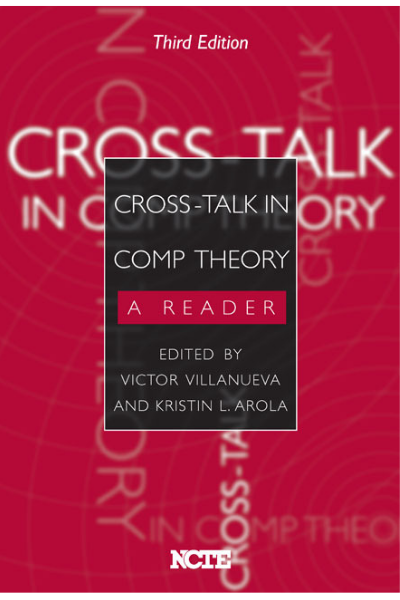 The 3rd edition of this invaluable anthology features eight new essays, including six in the new technology section, “Virtual Talk: Composing Beyond the Word.” Edited by Victor Villanueva and Kristin L. Arola.

For the third edition of Cross-Talk in Comp Theory, Victor Villanueva recruited the expertise of colleague Kristin L. Arola in order to flesh out the discussion on composition and technology. The quick movement of the paradigm—from the personal computer to local-area networks to the rise of social networking—suggests the need to recall the talk and the cross-talk concerning computers and their products for composition.

The award-winning Villanueva and his coeditor Arola have dropped nine essays from the second edition, reoriented others into new sections, and added eight new essays, including six in the new technology section, “Virtual Talk: Composing Beyond the Word.”

Amid these changes, the third edition maintains the historical perspective of previous editions while continuing to provide insights on the relatively new discipline of composition studies. Landmark contributions by major figures such as Donald Murray, Janet Emig, Walter Ong, Sondra Perl, Mike Rose, and Patricia Bizzell remain. They are joined by the works of other trailblazing scholars such as Peter Elbow and Richard Ohmann.

This edition also incorporates texts by key names within comp’s conversations on technology, including Adam Banks, Cynthia Selfe, and Kathleen Blake Yancey. The result is a collection that continues to provide new and experienced teachers and scholars with indispensable insights into the challenges, controversies, and ever-shifting currents within our rich and ever-evolving field.