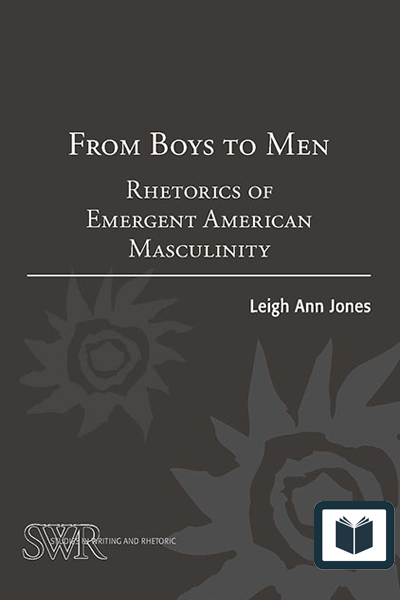 From Boys to Men: Rhetorics of Emergent American Masculinity (ebook)

Institutional, organized expressions of male coming-of-age encourage Americans to believe that emergent masculinity is an enduring natural phenomenon and an essential component of American identity, and that the outcomes of the transformation process from boy to man have important consequences for the United States as a nation. Leigh Ann Jones explores performances of developing young male identity in case studies from twentieth- and twenty-first-century federal and civic organizations that recruit boys and young men using appeals to American national identity, often coding these appeals as character building.

Examining documents from the Boy Scouts of America during the Progressive Era, the Sigma Chi college fraternity in the 1960s, and the US Army’s “Army of One” recruiting campaign in the early 2000s, Jones explicates rhetorical strategies that position the young male figure as a source of enduring national identification and as a citizen who is the product of a distinct trajectory of development and transformation. These strategies emerge from an intense interest among community leaders in the psychology of boys and are characterized by language that directs and shapes boys’ consciousness of themselves as males, tying that consciousness to an American identity. Applying Kenneth Burke’s concept of rhetoric as identification, particularly his understanding of constitutive rhetoric, Jones outlines a framework for understanding how such organizations for boys have endured, along with their myths about masculinity, in spite of the ways in which these stories are troubled by economics, gender, race, and sexuality.